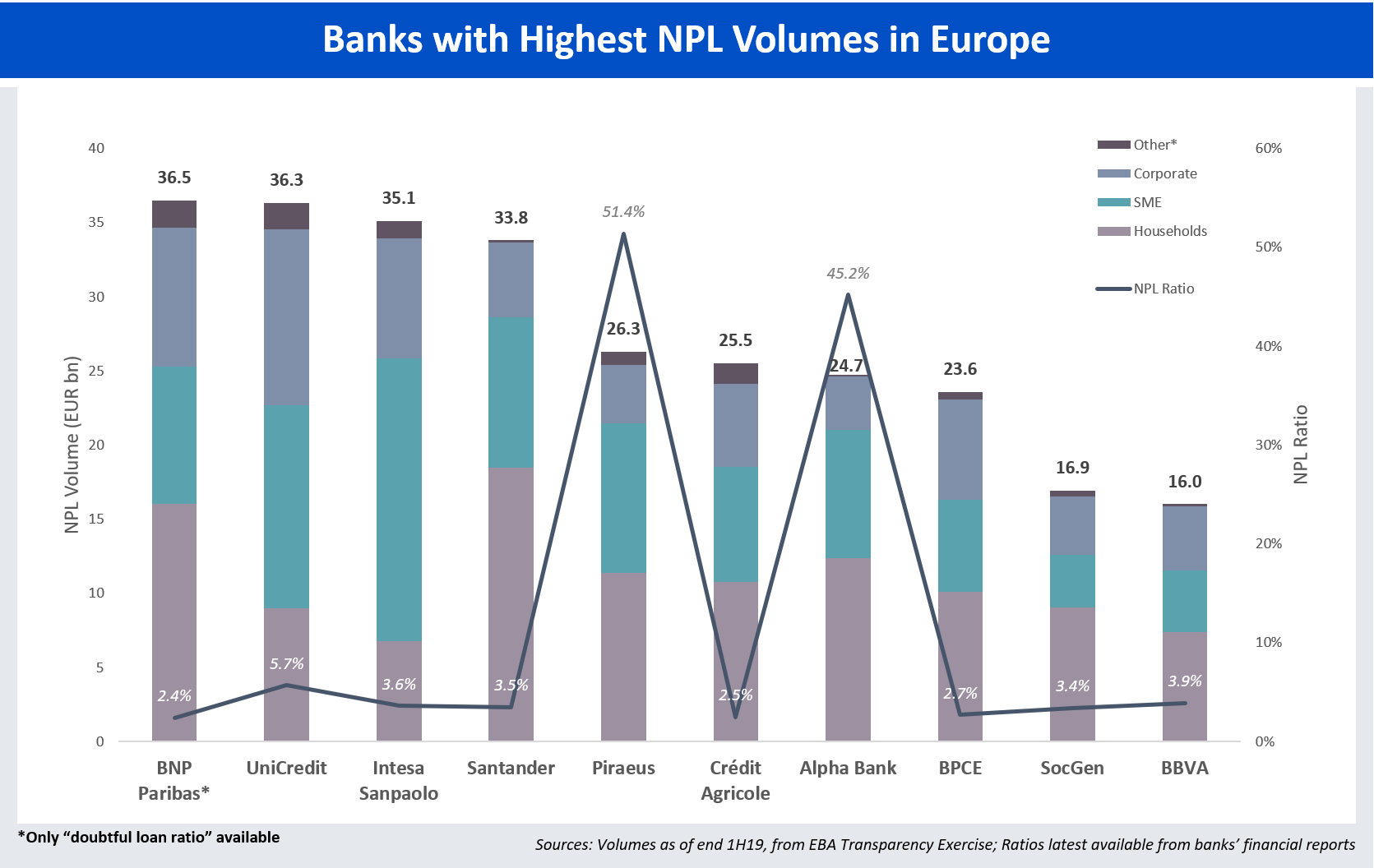 French Bank BNP Paribas holds the largest volume of non-performing loans among European Union banks, according to a Debtwire analysis of data from the latest EBA Transparency Exercise. The second largest bank in Europe had EUR 36.5bn remaining on its balance sheet as of end-June 2019.

The next two largest are Italian banks, UniCredit Group and Intesa Sanpaolo, with EUR 36.3bn and EUR 35.1bn respectively.

Santander Group, the largest bank in Spain, is not far behind, with EUR 33.8bn. The bank’s remaining NPL balance is dominated by household NPLs, which at EUR 18.5bn make up over half of the total.

Santander is currently selling the largest portfolios in Spain, a total of EUR 5.7bn in two transactions, Project Atlas and Project Prometheus, according to the Debtwire NPL Database. The EUR 2.7bn Project Atlas mostly consists of non-performing mortgages, as reported.

Of the top four, however, only UniCredit has an NPL ratio above the unofficial EBA target ratio, at 5.7%. The bank carried out the largest GACS deal of the year, selling the mezzanine and junior notes of Prisma SPV, a securitisation with a EUR 4.1bn GBV (EUR 6.1bn claims),  to SPF Investment Management in November, as reported.

BNP Paribas, Intesa Sanpaolo and Santander have NPL ratios of 2.4%, 3.6% and 3.5% respectively, compared to an average ratio of 3% across the EU.

In contrast, the Greek banks Piraeus Bank and Alpha Bank, which come fifth and seventh in terms of volume, have among the highest NPL ratios in Europe.

Alpha Bank confirmed the sale of a EUR 1.9bn NPL portfolio, Project Neptune, to Fortress Investment Group, at the end of 2019. The bank is also planning a EUR 12bn securitisation, according to its 2020–2022 strategy update. Using the Greek Government’s new Hercules scheme, the so-called Project Galaxy would reduce its Greek NPL stock by 73% in one transaction.