It has been a week of new records, according to Todd Schubert, Head of Fixed Income Research at Bank of Singapore. The Arab Republic of Egypt’s USD 750m 5.25% 2025 green bond was both the first green sovereign issuance in the region as well as the world’s first high-yield green bond, Schubert explained.

“Egypt has led the way in being the spearhead for Green issuance in the region,” and more sovereigns are expected to follow suit, said Khalid Rashid, Head of DCM MENA at Deutsche Bank.

Indeed, Egypt’s deal had been well received, bringing in a USD 3.7bn book for what had originally been marketed as a minimum USD 500m deal, said Schubert, with pricing tightening by 50bps from the IPTs.

The proceeds from the transaction will be spent on environmentally friendly projects, and Egypt has been showcasing its USD 1.9bn portfolio of potential green investments, said Vijay Valecha, Chief Investment Officer at Century Financial.

Green capex will form a growing share of overall public investment in Egypt, with the intention to have all investment projects tied to environmental standards in three years, said Maya Senussi, Senior Economist at Oxford Economics.

But given that 27% of Egypt’s GDP is derived from the petroleum sector, the country has a long way to go on its path to sustainability, cautioned one sovereign analyst.

In light of high levels of carbon emissions in the region “one could very easily be cynical and assume that it is inconsistent or even hypocritical for these countries to be issuing environmental bonds, that they are “greenwashing” and simply looking to source an additional pool of liquidity,” a report by Bank of Singapore said yesterday (30 September).

“However, not only would this be over-simplistic it would be missing the point entirely,” the report went on to say.

This is due to a long-term shift away from Petro Dollar growth in the region, as well as a damage to global economic growth from the effects of climate change were it to be ignored, said the report.

Egypt knows only too well what’s at stake with regards to climate change, with the country being one of the most susceptible in the world with regards to the displacement of its people and economy, as shown below from a report by Moody’s earlier this year. 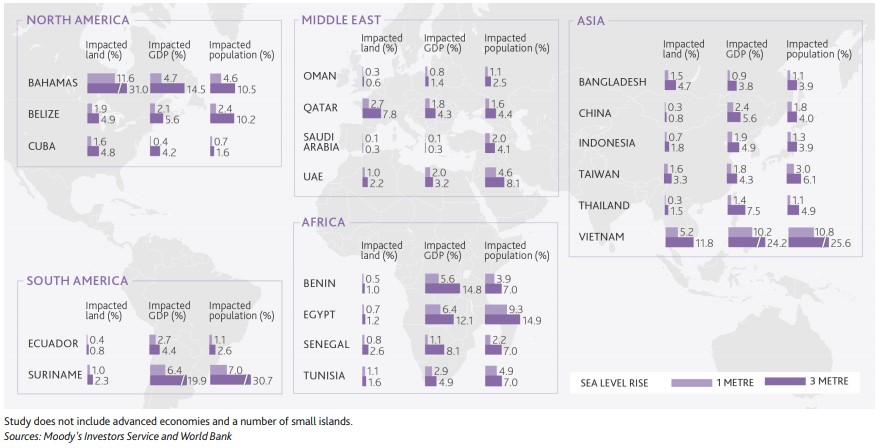 “The Nile flow has been affected by the decreasing rate of annual rainwater and remains exposed to climate change induced reductions in rainwater, which can have a significant negative impact on the economy and balance of payments,” explained Parisi-Capone.

Despite heady ambitions of a future without fossil fuels, Egypt’s most urgent motivation was probably to raise liquidity amidst a pandemic which has dented growth and seen a deterioration in its leverage, said the sovereign analyst.

The Central Bank of Egypt’s (CBE) foreign reserves and net foreign assets of the banking sector declined by a combined USD 18bn between February and June, even despite a net inflow of USD 8.6bn from Eurobond issuances and IMF funds, according to report by Fitch in July.

Such a strain on the CBE’s balance sheet combined with the country’s relatively high financing needs increased the country’s desire to come to the market, said the sovereign analyst.

Egypt’s gross financing needs stand at 30-40% of GDP annually, which is one of the highest in the world, said Parisi-Capone.

The foreign currency funding and refinancing need currently stands at approximately USD 18bn, which is in part covered by the IMF’s USD 2.8bn Rapid Financing Instrument, a USD 5.2bn 12-month stand-by arrangement and a USD 5bn issuance in May, said Parisi-Capone.