When the Tower of Lethendy, a baronial-style eight-bedroom castle near Perth, Scotland, went on the market in 2015 for more than GBP 2.5m, pop icon Taylor Swift was among those rumoured to be an interested buyer.

Swift promptly took to Twitter to deny any intention of acquiring the property: “Cause baby I could build a castle out of all the bricks they threw at me […] But I’m not actually buying a castle.”

But court documents reviewed by Debtwire show the estate is believed to be in the hands of exiled oligarch Boris Mints and his family, just one of a raft of assets frozen as part of a half-a-billion-dollar lawsuit brought in the London courts by bailed-out Russian lender Bank Otkritie.

Other assets identified by claimants in the USD 572m freezing order include two mansions in the leafy St George’s Hill estate in Weybridge, one four-star and three budget hotels spread across England and 21 apartments and garages in Moscow. The family’s stake in emerging market hedge fund EG  Capital is also named.

The lawsuit against Boris Mints and his three sons, Alexander, Dmitriy, and Igor, relates to the sale of unsecured bonds issued by a special purpose vehicle controlled by the Mints family to Bank Otkritie and Rost Bank shortly before they were placed into temporary administration by the government. Proceeds of the bond sales were used to repay well-secured loans to those same institutions.

Rumours that the Central Bank of Russia (CBR) was set to come down hard on struggling private banks started to circulate the market in mid-2017. Bank Otkritie – in a parlous financial position at that time – was known to be a strong candidate for a government takeover.

In early August 2017, O1 Group and its various subsidiaries owed roughly USD 507m to Bank Otkritie through a series of loans. These loans were secured by share pledges over roughly 84% of Moscow real-estate company O1 Properties  Limited’s Class A shares and 20% of its Class B shares. O1 Properties’ portfolio was valued at USD 4.1bn in January 2017. 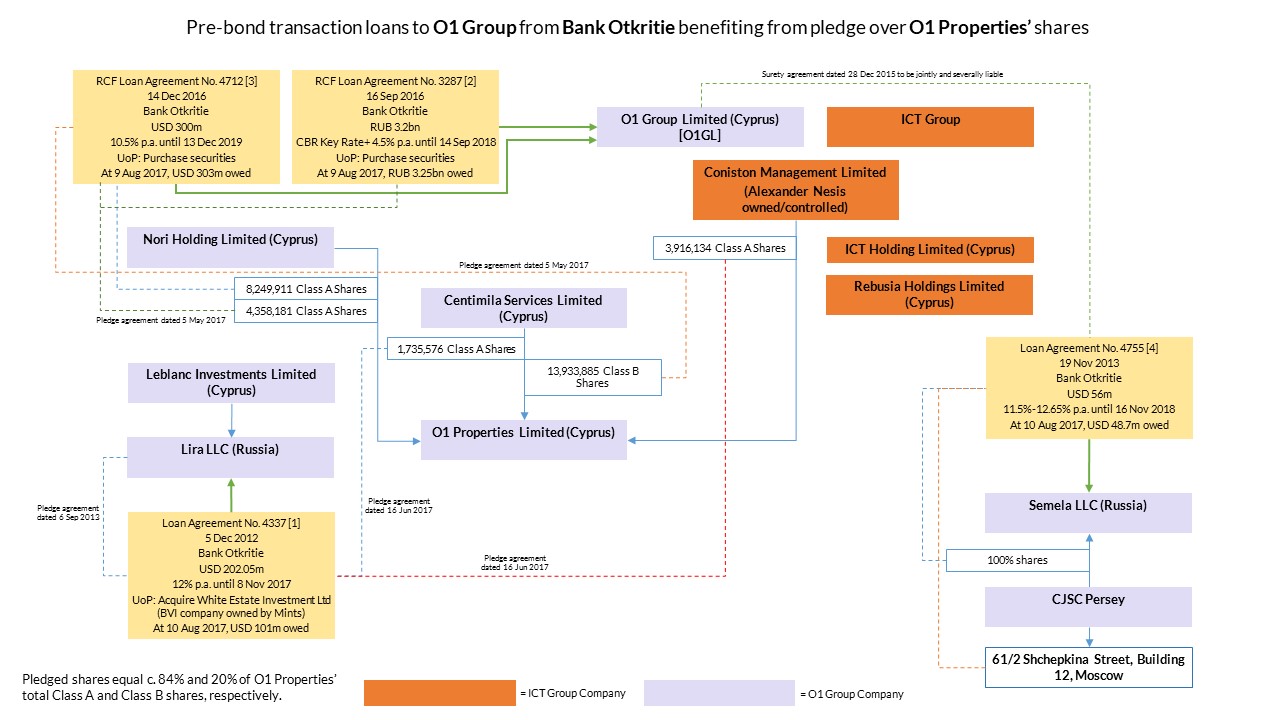 Boris Mints, who had previously served as chairman of Bank Otkritie and continued to be a minority shareholder, was aware that if the bank were placed into temporary administration by the CBR – and new “honest and independent” managers installed – the repercussions for his O1 Group would be severe, according to Bank Otkritie’s claim.

The freshly installed executives at Bank Otkritie would likely insist that the bank increase provisions against its lending to the O1 Group, might ratchet up interest payments, demand additional security, refuse to roll over the debt or, in a worst-case scenario, seek early repayment. O1 Group was itself facing financial difficulty at this time and was in the process of restructuring a number of its liabilities.

As widely predicted, the CBR did step in and place Bank Otkritie under temporary administration on 29 August 2017.

According to the claimants, Mints would have understood that the probable result of the CBR takeover would be a default by O1 Group, and the subsequent loss of the assets it had pledged as security. In the case of debts owed to Bank Otkritie, this would have resulted in O1 Group handing over its valuable stake in O1 Properties.

With this in mind, Mints and his sons formulated a plan with Bank Otkritie’s largest shareholder Vadim Belyaev, a “close friend” of Boris Mints, and the chairman of the bank’s management board Evgeny Dankevich, the lawsuit alleges.

O1 Group Finance, a fundraising vehicle for the group, issued RUB 40bn (USD 665m) worth of unsecured bonds on 1 August 2017 on, it is claimed, wildly off-market terms. Notably, the bonds were structured to not pay any significant interest until 2032 – the same year the bonds mature.

Within a fortnight, Bank Otkritie had purchased nearly RUB 35bn of the issuance. O1 Group used the proceeds to repay all the secured loans to Bank Otkritie, dispose of the security arrangements, and refinance RUB 4.35bn in repo loans that related party Rebusia Holdings Limited owed to the lender.

Rather than just amend the bank’s book entries to reflect the new terms of the debt, the bond proceeds were channelled through a “complex web of entities” including the Latvian account of ICT Holding (BVI) Limited, before being used to repay the loans to Bank Otkritie, the claim states.

ICT Holding was never part of O1 Group but was itself a minority shareholder in O1 Properties and controlled by third-party, Alexander Nesis. Rebusia Holdings was part of Nesis’s ICT Holding group.

The claimants argue that the purchase of the bonds by Bank Otkritie was pushed through at the behest of Dankevich, who subsequently fled to Israel, according to court documents. Transcripts of phone conversations from that time show employees of the bank using a variety of pejoratives to describe the deal, including “crazy”, “folly”, “bullshit” and “garbage”.

For their part, O1 Group companies have claimed in related proceedings in Cyprus and in the London Court of International Arbitration (LCIA) that the commercial rationale for the bond issuance was in fact to bolster Bank Otkritie’s liquidity by furnishing it with securities to repo.

Released from the security agreements, O1 Group transferred the previously pledged shares to related parties, including Agdalia Holdings, a newly established Cyprus-based company, “with (it is to be inferred) the intention […] to put them beyond the reach of [Bank Otkritie] in or after any subsequent legal proceedings”, the claimants allege in court filings.

The shares were subsequently pledged to another of O1 Group’s creditors, Credit  Bank of Moscow (MCB). A default on debts owed to MCB ultimately led to the takeover of O1 Properties by MCB-assignee Riverstretch Trading &  Investments Limited, that triggered long-running change of control negotiations with holders of O1 Properties’ Eurobonds, as previously reported.

On 27 September 2017, the now government-controlled Bank Otkritie wrote to the O1 Group threatening legal action if the bond-for-loan swap was not reversed – which it went on to initiate on 31 October 2017.

However, by this stage it was too late, with Mr Justice Jacobs accepting in his judgment the claimant’s view that “the disposal of the shares in O1 Properties to Agdalia, and thence the further pledge of those shares to MCB, was designed to render nugatory any judgment which reversed the replacement transaction”.

Shortly after the transaction with Bank Otkritie, Mints is alleged to have undertaken USD 375m-equivalent worth of similar transactions with Rost Bank, again removing collateral available to the lender should O1 Group suffer a default. Rost Bank was itself placed under temporary administration by the CBR in September 2017.

The value of the USD 572m asset freeze amounts to the estimated difference in value between the loans from Bank Otkritie and Rost Bank prior to their repayment and the value of the O1 Group bonds received by these banks.

Meanwhile, a shareholder resolution was passed on 29 December 2017 to reduce the share capital of Nori Holding Limited, part of the O1 Group and a shareholder of O1 Properties. On 1 March 2018, a Cyprus court granted an order allowing the company to reduce its share capital by around USD 202m to just USD 2.3m and pay out the reduction to O1 Group.

The whereabouts of this money, the claimants say, remains unknown. “The evidence as to the destination of the USD 200m is unclear, and has not been addressed by the Defendants in their evidence. It seems to me to be a reasonable possibility that these monies went into this [MF Trust, established on 27 December 2017], or another family trust,” states Jacobs J. in his judgment.

A litany of litigation

The case against Mints’ companies has already been the subject of substantial litigation in Russia.

The court found the transaction to be “a scheme made for the unlawful purpose of causing damage to Bank Otkritie, which led to major damage to it” and the that “each of the Otkritie Loans and Otkritie Security Agreements should be restored”, according to Bank Otkritie’s London High Court particulars of claim.

The Ninth Arbitrazh Appellate Court later upheld the lower court’s decision on appeal on 10 June 2019. A lawsuit in Russia relating to the Rost Bank loans is still “at a preliminary stage”.

But in early 2018, companies related to Mints took the initiative. On 2 January 2018, Nori and Centimila commenced arbitration at the LCIA, while Coniston commenced proceedings on 14 February 2018, seeking declarations that the loan and pledge terminations were valid, according to a judgment in a related anti-suit injunction case in London.

The pledge agreements were governed by Cyprus law and contained a clause that stipulated the LCIA as the forum for arbitration should any dispute or disagreement arise under the agreements.

An anti-suit injunction was granted by Mr Justice Males on 22 May 2018 in the London High Court, in favour of Nori, Centimila and Coniston – the three companies that launched actions at the LCIA – against Bank Otkritie, preventing it from continuing proceedings before the Russian courts in breach of the arbitration clauses in the pledge agreements.

Bank Otkritie brought a claim in Cyprus on 19 January 2018 on similar grounds to those brought in the Russian courts, seeking orders annulling the transactions and restoring the pledge agreements, or otherwise damages.

However, the Cypriot proceedings have now been abandoned, a source close to the situation told Debtwire. This leaves it unlikely that the pledge termination will now be unwound, given the agreements were under Cyprus law. The current claim in London’s High Court is instead a simple claim for damages.

A defence is currently due from Boris Mints and his sons in the High Court case in September, noted the source close, and the case could take another two-and-a-half years to come to trial. But the outcome of the LCIA proceedings may be determined far sooner, in April 2020, and depending on the result could dispose of the need to continue the case in the High Court, the source said. 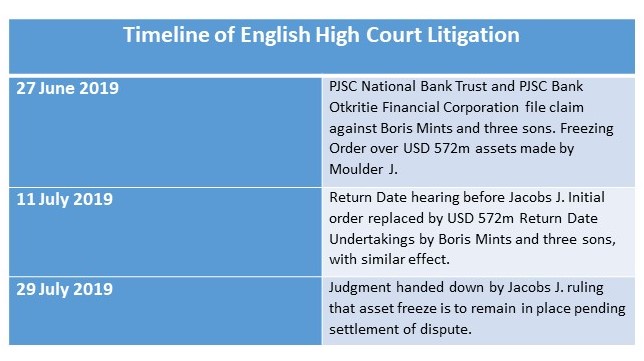