The Government of Mozambique’s proposal to restructure its 10.5% 2023 sovereign bonds, submitted today (6 November), is an important step toward reaching a final agreement, according to four market participants. However, questions remain regarding the timeline for implementation, the possibility holdout creditors may drag their feet, and the likely net present value (NPV) recovery rate.

In addition, the latest proposal includes value recovery instruments (VRIs) linked to Mozambique’s fiscal revenues from the Area 1 and Area 4 gas projects, whereby holders would receive 5% of Mozambique’s previous-year fiscal revenues derived from the projects until 2033. The total amount to be received by these VRIs is capped at USD 500m. 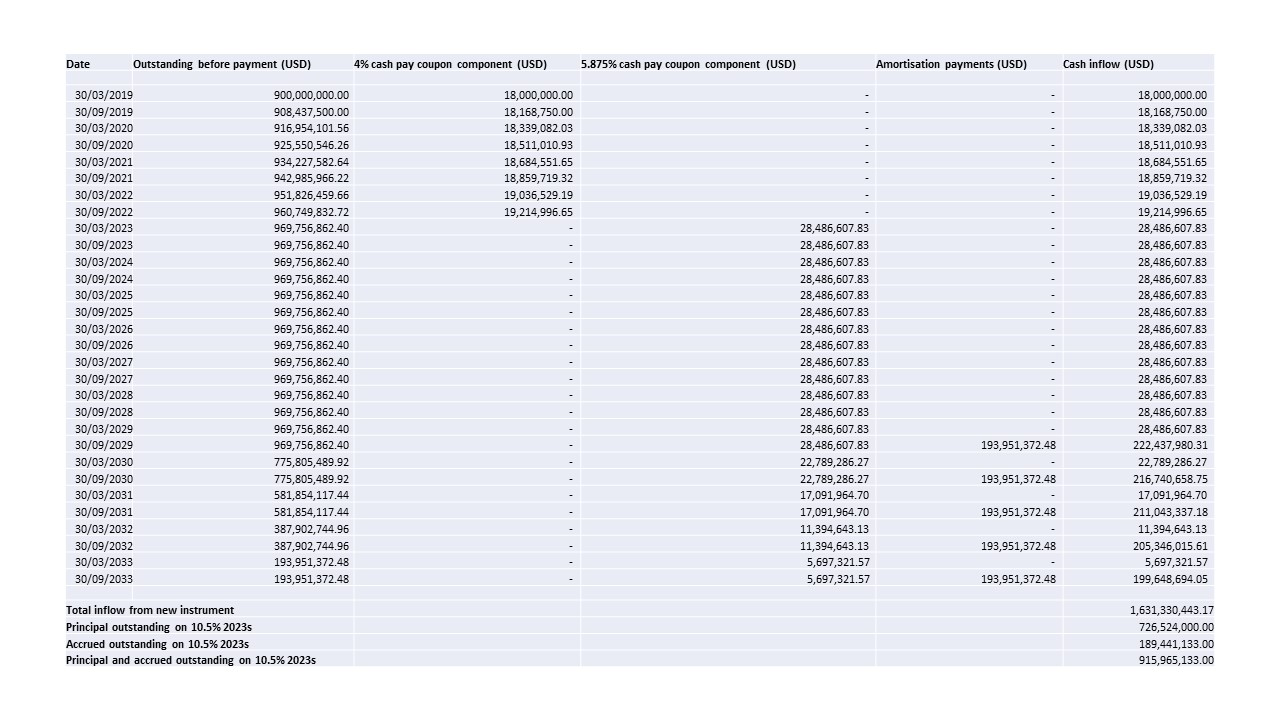 The terms are an improvement on an initial proposal put forward in March that envisaged a close-to-35-point NPV haircut.

“[The new proposal] looks like a well-composed deal for both parties -- none of the debtholders wanted to make this too onerous for Mozambique,” said an economist. “There’s a lot of relief upfront and it doesn’t have a large haircut. Depending on how you price the warrants you could potentially end up above par.”

The bonds were quoted at 91-mid this afternoon, from mid-80 levels before the proposal was announced, according to a bondholder.

“We wanted to be sure that the new deal left Mozambique with a manageable fiscal burden,” said a source close to the situation. “We will go via a consent solicitation and hope to obtain a supermajority in support for the exchange.”

Mozambique’s government and four out of the five members of the Global Group of Mozambique Bondholders (GGMB) – who hold between them close to 60% of the notes – hope to implement the restructuring via a consent solicitation and an exchange offer on the bonds, which will most likely launch in early 2019, today’s announcement reads.

But this will require approval from 75% of bondholders for the collective action clauses (CACs) on the bonds to be triggered, the first and a second and third sources close to the situation confirmed, implying the GGMB needs to bring on board a further 15% of holders to pass the proposal.

“In theory they can still reach 75% for the CACs to go through [without Franklin Templeton’s participation], but the fact that other bondholders did not join GGMB in the first place obviously indicates that they may be less willing to find an agreement,” said a buysider away from the deal.

The bondholder told Debtwire that early discussions with other holders, including some outside GGMB, indicated that the 75% threshold could be reached without Franklin Templeton’s participation.

“My view is that at this point either you vote in favour or you sell,” said the bondholder. “But of course, Franklin [Templeton] has been known to hold out in the past, and I can't think of another reason why they would do so, other than they are unhappy with the price on offer.”

Another set of uncertainties loom over the proposal, namely, the difficulty of assigning a clear value to the VRIs, said the four sources polled. Part of this is due to the long duration of the instruments and the considerable variations in gas prices which could occur in this timeframe.

“The major unknown factor is the gas price,” said the economist. “With 5% of the previous year’s revenues from the projects going into the pool to pay creditors, you won’t know what the fiscal stream looks like without knowing where gas prices are going – and this is driven by oil.”

In addition, delays to the Area 1 and Area 4 developments, which – as reported by Debtwire – are both seeking lender support to develop onshore LNG facilities, could also impact the government’s fiscal revenues.

A study published in June by the Instituto Nacional De Petróleo (INP), Mozambique’s energy regulator, forecasts substantial variations in government revenue from Areas 1 and 4. In the best-case scenario, annual fiscal revenues from Area 1 and 4 combined would spike from USD 500m in the late 2020s to USD 1bn in 2031, allowing VRI holders to benefit from two years of increased revenues.

But in the most negative or “contingency scenario”, where delays to project completion are considered, this spike only occurs in 2034, a year after the VRIs expire.

“It is unfair to say that bondholders will be getting 5% of government revenues,” said the bondholder. “First of all, this is capped both in size at USD 500m and in time at 2033. Any late spikes in project revenues will mean the vast majority of the revenues will be received post-2033, and holders would be left with an equivalent of 1% to 2% of gas linked government revenues. You can see why the government is so keen to increase the duration of both instruments.”

Another factor potentially complicating the proposal is the status of the government’s restructuring negotiations with creditors under a USD 622m loan extended by Credit Suisse to state-owned defence company Proindicus and a USD 550m loan from VTB to Mozambique Asset Management (MAM). Both loans carry sovereign guarantees.

Given the opaque circumstances under which these debts were incurred, bondholders initially argued vociferously that the government guarantees of the MAM and Proindicus loans be disavowed by the government. However, to bondholders’ chagrin, the government maintained that all commercial creditors be treated equitably.

Following the government’s rejection of a restructuring proposal from Proindicus creditors in mid-October, discussions with both sets of loan creditors are still ongoing, the first and second sources close told Debtwire. These discussions are being conducted separately from the bondholders and could result in different restructured instruments, they added.

“I expect the government to focus on closing the bond restructuring before engaging with loan holders, despite what they initially said about treating both types of creditors [equally],” said the bondholder. “The process is completely different, they will probably get new loans to restructure this. Banks are not natural holders of VRIs.”

When asked whether loan creditors would be able to block the proposal on the table for bondholders, the second source close was adamant: “The MAM and Proindicus lenders have no ability to block this restructuring, as their instruments are entirely separate from those of the Mozambique bondholders.”

As well as seeking sufficient bondholder support, the proposal must also be approved by Mozambique’s parliament, the bondholder and first source close said. This is a new process for the country, one that was introduced following the issuance of the original loans and loan participation notes, in order to put debt issuance in line with international standards, the first source close said.

“This includes approval from the attorney general, and the proposal has to go through a number of steps in parliament before ultimately getting parliamentary approval,” the first source close said. “It’s untested territory, so the exact timeline on the Mozambican side is hard to know.”

As things stand, the ruling Frelimo party, in power since Mozambique gained independence in the late 1970s, has a majority in parliament, but faces national and presidential elections in October 2019. While it dominated the recent local polls, opposition Renamo gained traction in some central and Northern areas of the country, although the extent to which this could pose an electoral threat is unclear.

In addition to the legislative process to approve the proposal, putting in place the documentation for the new instruments could take time, the first source noted.

“[Because] the VRIs [are] novel instruments, [documentation] may take a while,” said the first source close. “Still, we are hoping to have everything in place at the beginning of 2019, hopefully before the first coupon payment date of the proposed instruments.”

Mozambique is being advised by Lazard and White & Case in financial and legal matters, respectively.