Turkey’s currency crisis – spurred by burgeoning hard currency corporate debt and a large trade deficit – caused a debt restructuring boom in 2H18. President Erdogan’s unorthodox monetary policy and a fragile relationship with the US - peaking with the pastor Brunson spat – poured further fuel on the flames of economic turbulence.

However, besides Yildiz Holding, which eventually signed a USD 5.5bn debt refinancing agreement in May 2018 and OTAS, none of the debt restructurings have yet reached financial close.

Feast before the bitter coffee

After hitting rock bottom at the end of summer 2018 – having lost 45% of its value against the US dollar in eight months – the Turkish lira has since recovered markedly following the Central Bank of Turkey’s (CBRT) sharp monetary policy tightening. The CBRT aggressively hiked rates by 625bps in September, following months of resistance. The move was closely followed by a thaw in relations with the US.

While rate hikes were clearly the solution last year, the “timing was too late” and the damage is already done, noted an Istanbul-based trader.

Now, the CBRT will not risk making a radical decision to loosen rates until local elections are held on 31 March, the trader continued, noting that Erdogan likely would not risk a sharp depreciation in the lira at this politically sensitive moment.

While the upcoming elections are not parliamentary, they are considered highly important, as “every referendum, every election, every vote” is perceived as a vote of confidence (or otherwise) in Erdogan, said an Istanbul-based financial advisor.

However, monetary policy may be loosened shortly after the elections, said the trader. High interest rates for local currency borrowing is proving a key culprit behind corporate distress. “This tight monetary policy is sucking the blood off the market,” said a second Istanbul-based financial advisor.

While many believe large bankruptcies are the necessary price to pay for maintaining higher rates and staving off inflation, others prioritise helping the real economy and business continuity with looser rates, said the trader.

“Erdogan will probably be tempted to loosen it in order to preserve jobs. I'm personally somewhere in the middle,” continued the trader. "The real sector may need it, because if you face recession it is difficult to keep the interest rates above 20%.

However, the chief of the CBRT recently announced that tight monetary policy will be maintained until there is a convincing fall in inflation and even tighter policy may be adopted if needed.

All the measures so far undertaken by the government are solely for the purpose of short-term relief, according to the first financial advisor. “These measures, which aim to keep the chaos away and release the tension until the local elections, will cause much bigger problems right after March,” he continued.

Turkish banks still avoid revealing the accurate levels of non-performing loans (NPLs) on their balance sheets, said an Istanbul-based legal advisor. At a certain point the Banking Regulation and Supervision Agency will be forced to stop ignoring this issue and when the realistic figures are revealed, the NPL ratios will be around 20%, he continued.

The biggest problem that Turkey is facing is the sustainability of high interest rates, according to the second financial advisor. The interest cost of borrowing in lira has spiked, while the EBITDA margins of many borrowers hover around 12%-13%, he continued. 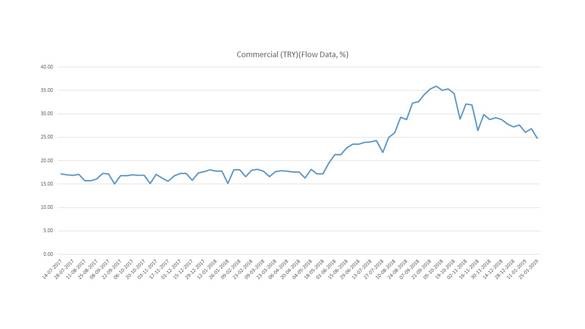 Leveraged companies will find it difficult to service their increasingly expensive local debt, according to the two Istanbul-based financial advisors and a London-based restructuring advisor. Many companies will find their cash flow turning negative in the coming months, said the second financial advisor. Additionally, securing further loans to fund working capital will become untenable due to high interest rates, according to the legal advisor.

Meanwhile, banks are still not warmed to the idea of writing off bad debt, said the legal advisor. As a consequence borrowers are unable to secure funding and with banks not provisioning, the bad debt situation is worsening, he continued.

This resultant wave of restructuring is going to hit hard, according to the two Istanbul-based financial advisors and the legal advisor. All the companies that reorganised their debt last year, together with many of the companies known to be stressed, will come to the restructuring market after March, according to the first financial advisor. Small and medium-sized businesses will also be particularly badly hit, added the legal advisor.

The bad loans in the real sector aren't resolved at all and new companies are still filing for composition, noted the trader. “The current account deficit tightened because companies sold goods from inventories instead of making new investments. When they run out of inventories, inflationary pressures will rise again.”

Just like last year, the energy sector will take the worst hit, said the London-based restructuring advisor. The issue is that the government is continuing to keep tariffs too low in an effort to subsidise energy costs for the general public, which makes the power generation projects unsustainable, he continued.

In January, Turkish press reports noted that Kalyon, the Turkish construction company and Hanwha, the South Korean conglomerate decided to part ways on their USD 1.3bn onshore solar project in Turkey. The project failed to reach financial closure, since the consortium failed to find financing for the project as a result of Turkey’s currency crisis, and high local interest rates.

Several conglomerates and Turkish companies which were in talks for debt restructuring proceedings, including Dogus Holding and Bereket Enerji, are continuing discussions without a restructuring advisor.

Dogus was assisted in its restructuring efforts by one of its board members, Ergun Ozen, who was CEO of Garanti Bank for 15 years. Bereket Enerji cancelled its request for pitches from restructuring advisors, appointed the former CEO of SOCAR, Idris Kupeli as its new CEO is August and deemed an external advisor unnecessary.

Due to asset disposals and as a result of the distressed situations, the M&A market has been very busy, but it will even be busier in 2019, said the legal advisor. Either the companies themselves will be willing to sell, or the creditors will force them to do so, he continued.

There are several strategic investors – mostly from Germany, Austria and the Netherlands - looking into this area and watching the market very closely. They are specifically chasing M&A deals in the area of industrial production, the legal advisor continued.

Asli Orbay is a reporter working for Debtwire CEEMEA, with a focus on arbitration, litigation and distressed situations. Prior to joining Debtwire, Asli worked as a banking and finance lawyer for Clifford Chance in Istanbul. Asli holds an LLM in international economic and trade law and a she is currently a PhD candidate studying at Brunel University.