Since the Italian government’s GACS guarantee scheme was introduced in early 2016 to help banks tackle their mountain of non-performing loans, lenders have disposed of EUR 81bn of NPLs in 25 such transactions. Now, slowly but surely, the special purpose vehicles (SPVs) to which banks transferred their NPLs under the GACS programme have started selling on bad loans to third parties.

With Italy in lockdown since Tuesday 10 March due to the coronavirus outbreak and economic activity reduced, servicers’ business plans might well be delayed with an impact on deal performance and portfolio sales, as DBRS Morningstar warned in a recent commentary. Before the crisis hit, however, a secondary market was rapidly developing. In the second half of 2019, sales from GACS SPVs reached their highest level yet, according to a Debtwire analysis of transaction data and official disclosures. 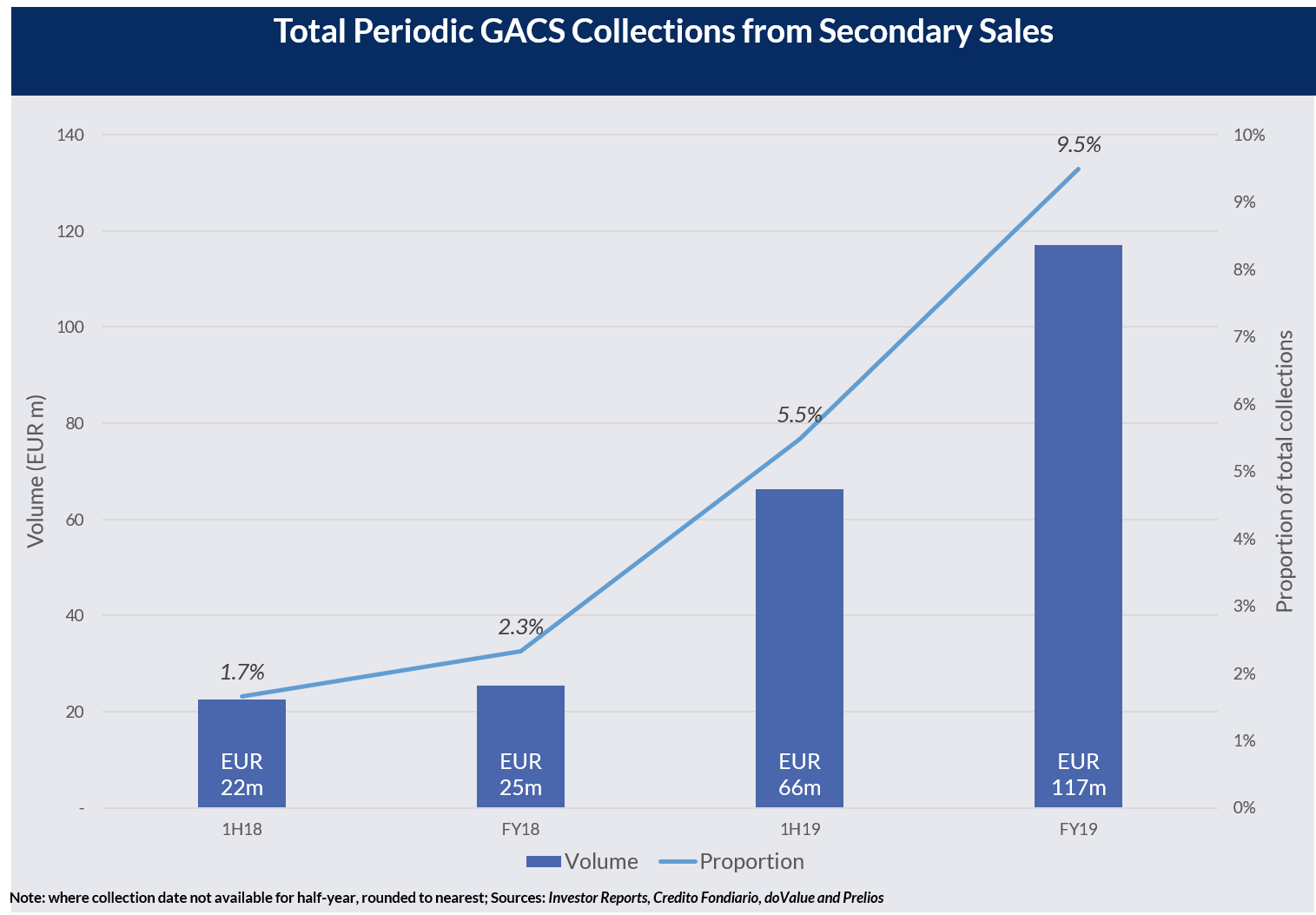 Secondary sales are part of the normal management of NPL portfolios, according to Guido Lombardo, CIO of Credito Fondiario. In order to optimise returns, investors can ask servicers to sell single names or specific sub-portfolios that can be better managed by specialised buyers.

For some deals with poor performance, though, sales can also be a way to maintain a regular cashflow, several buyers pointed out. In fact, four of the seven vehicles that sold the most loans as a proportion of collections have perfomance issues, according to Debtwire’s analysis.

Debtwire analysed the performance of and sales from the 21 GACS securitisations priced between August 2016 and February 2019, involving NPLs with a GBV at closing of EUR 74bn, with data from the servicers managing them and from the rating agencies DBRS Morningstar, Moody’s Investors Service and Scope Ratings. The analysis did not include the four GACS securitisations launched since the Italian government’s renewal of the programme in March 2019, since they have not passed their first interest payment dates.

In 2H19, out of the 155 secondary trades, 24 were sales from GACS SPVs, up from 17 in 1H19, nine in 2H18 and two in 1H18, based on transactions recorded in the Italian public registry, the Gazzetta Ufficiale. So far, just one deal was recorded for 2020 — slow activity is typical of the first quarter of the year.

Sales can be part of a servicer’s strategy, according to Rossella Ghidoni, associate director of structured finance at Scope. If a servicer is aware that there is a market for loan sales, they may decide to sell now rather than waiting.

If the value of the sale is higher than the predicted future recovery, it will be worth more to sell now, said Christian Aufsatz, head of European structured finance at DBRS Morningstar. A given sale will be worth less later in the cycle, considering the time value of money, he added.

On the other hand, servicers may also be incentivised to sell for other reasons. “One line of thought is that it’s a necessity,” said Aufsatz. If the cumulative collection ratio is low, a quickly organised sale could help avoid a trigger breach. But if the sale is made at a steep discount, it could erode value and profitability, which is often subject to a separate trigger.

The issue is particularly delicate for sales from GACS SPVs given that in case of particularly poor performance the Italian state will have to foot the bill. 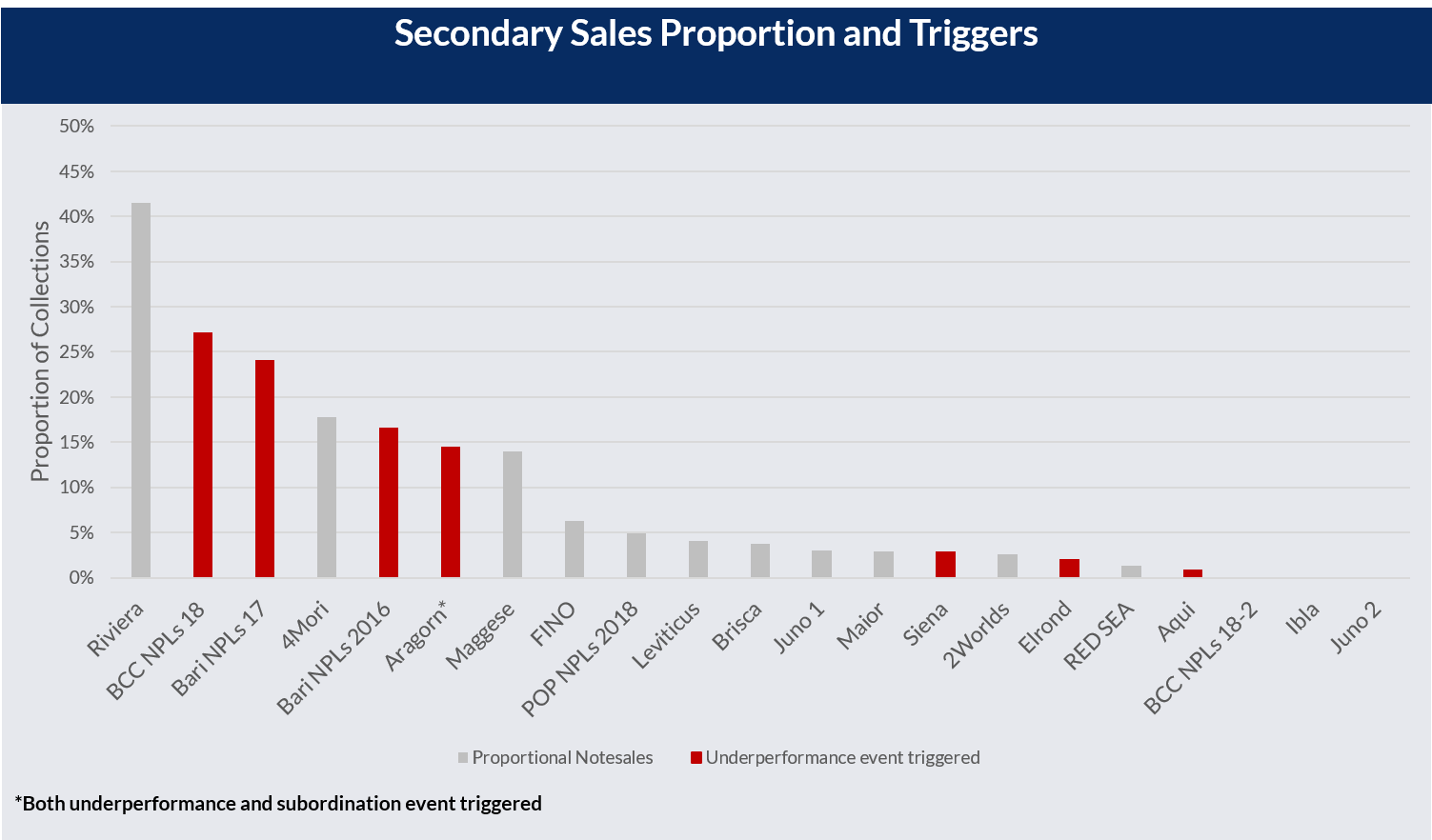 Banca Popolare di Bari was the first bank to issue a GACS securitisation, starting in August 2016 with a portfolio with a GBV of EUR 480m and following in December 2017 with a EUR 320m portfolio.

In 2019, both vehicles sold portfolios to buyers including Anacap and Balbec, Debtwire found.

In both cases, despite the sales, the profitability ratio, another main performance indicator, has not increased.

Popolare Bari NPLs 2016 started to sell in 1H18, according to Debtwire’s analysis. In the six months to December 2018, 16.69% of collections came from sales, or EUR 1.4m out of EUR 8.8m. The profitability ratio was 108% for two periods in a row, under the relatively high threshold of 110%, triggering an underperformance event and partially deferring servicing fees. Net cumulative collections were 93.47% of business plan, above the trigger level of 90% for subordinating mezzanine interest.

Sales increased in 2019. In the first half of the year, EUR 5.8m or 43.49% of EUR 13.8m collections for Popolare Bari NPLs 2016 came from sales. In that period, the Gazzetta Ufficiale registered a disposal from the issuer to Duomo SPV, a vehicle that Debtwire has linked to Balbec. Balbec declined to comment for this article. The net cumulative collection ratio improved to 99%, but the profitability ratio fell to 102%, still under the 110% threshold.

In 2H19, the vehicle collected EUR 2.7m from sales or 41.13% of total collections of EUR 6.6m. In November 2019, it sold a portfolio to Tiberius SPV, a vehicle which is owned by AnaCap, according to its financial reports. AnaCap did not respond to a request for comment. The cumulative collection ratio fell again to 93%, and the profitability ratio declined further to 101%.

Profitability is computed as the present value against business plan expectations. Therefore, it factors in the actual timing of collections versus the expected and a discount component, according to Scope’s Ghidoni. “Selling sooner will therefore have a positive impact on profitability, assuming the price is sufficiently high,” she said. 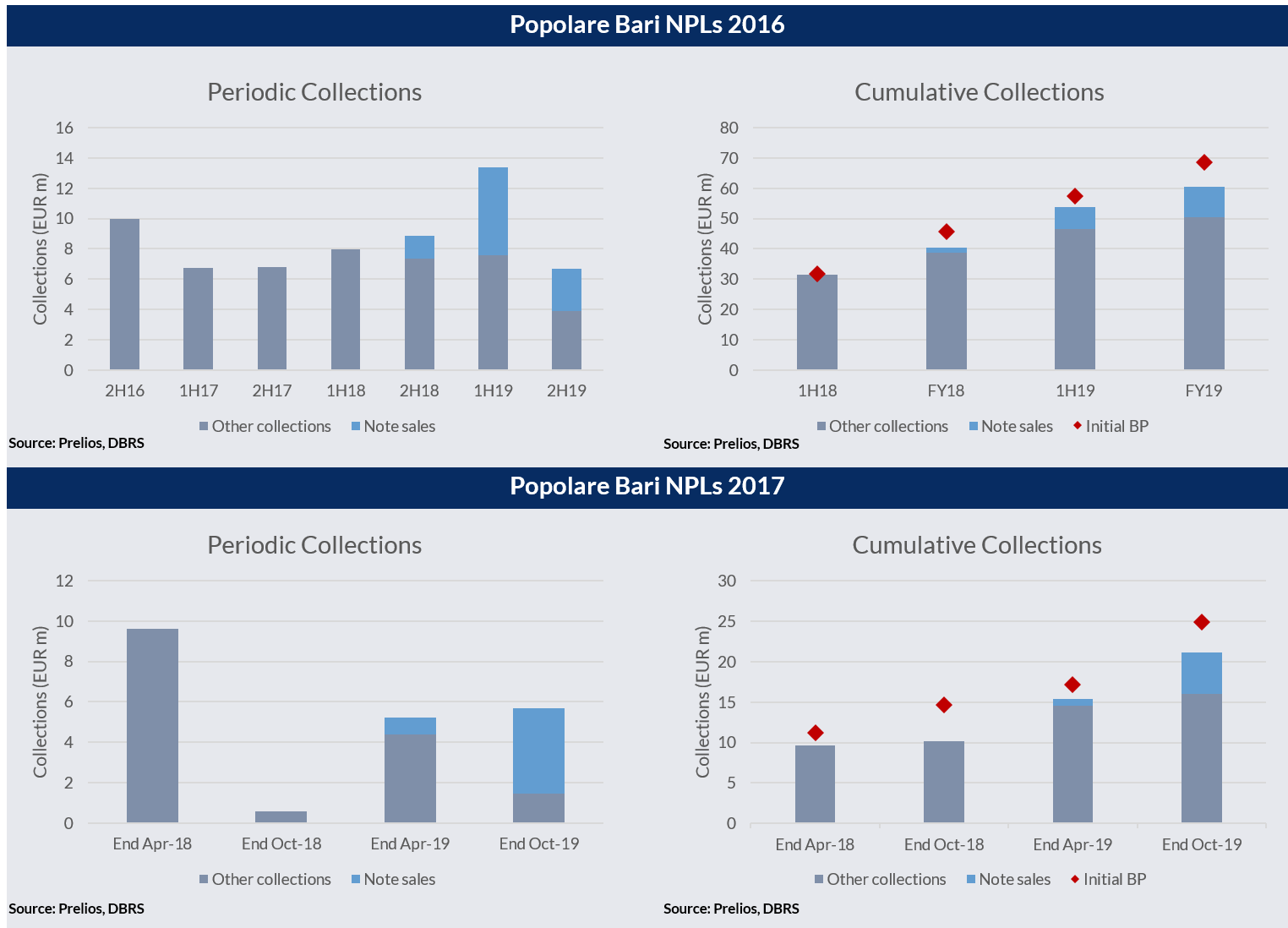 The securitisation that has sold the second most loans proportionately is the EUR 1bn GBV BCC NPLs 2018, launched in July 2018 by Iccrea Banca.

The vehicle, managed by Prelios, has EUR 31m in cumulative collections from sales, or 27.17% of total collections of EUR 114.7m. Buyers included Balbec’s Duomo SPV, Mediobanca’s MBCredit Solutions, and Tyche.

Under the documentation of the securitisation, which Credito Valtellinese (CreVal) closed in June 2018 with a EUR 1.6bn GBV portfolio, subordination and underperformance events occur at 100% for both gross cumulative collections and profitability.

Profitability has remained above this threshold, but the gross cumulative collection ratio was 98.8% in June and 91.8% in December.

Aragorn is the only GACS issuer for which both underperformance and subordination events have happened, three times in a row for each.

Not all loan sellers have performance issues. Banca Carige’s Riviera NPL has sold the highest proportion of loans, cashing in EUR 19.6m or 41.4% of its EUR 47.2m total collections, mainly due to a peak of activity in 2H19. Its net cumulative collection ratio is 140.3% and profitability is 100%.

Most sales from Banco di Sardegna’s 4Mori Sardegna were in 2H19, resulting in collections of EUR 7.9m out of EUR 21.8m total collections. The buyer for that period was AnaCap’s Tiberius SPV, according to the Gazzetta Ufficiale. The profitability and net cumulative collection ratios remained over their triggers at 134% and 107% respectively.

Cassa di Risparmio di Asti’s Maggese 2018 has closed three sales to Balbec’s Duomo SPV and to Saphira SPV, with cumulative collections from sales of EUR 5.6m or 13.97% out of the EUR 40.6m total. Its profitability and net cumulative collection ratios remain ahead of business plan at 104% and 101%.

For buyers and sellers, the main issue is always to find the right balance of price, several buyers noted. So far servicers have been selling mainly specific clusters of portfolios that require or benefit from a focused servicing approach, such as small claims and older unsecured claims.

Siena NPL 2018 is the largest single GACS portfolio at EUR 24bn when sold by Banca Monte dei Paschi di Siena at the end of 2017. After an initial management period, the investor and servicers identified a small subset of claims that were attractive for a specific investor with focused servicing capacities in that specific sector, according to Credito Fondiario’s Lombardo. The sale was small in size and value but freed up capacity to better address core value creation positions in the remaining portfolio.

So far, Siena NPL 2018 has collected just EUR 57.8m from sales out of cumulative collections of EUR 2bn, so the impact on total collections and profitability has been limited.

Among the buyers was Banca IFIS, said Katia Mariotti, head of NPLs at the specialist bank. In December 2029, IFIS bought a portfolio of corporate unsecured NPLs with a GBV of circa EUR 120m, Mariotti said.

Selling a part of the portfolio to a specialised player such as IFIS can be advantageous for both buyer and seller, she said. For a servicer, focusing on a variety of asset classes “can be very time consuming in terms of resources,” while a specialised player “can generate more value”.

In December, IFIS also bought a portfolio with a GBV of EUR 100m from UBI Banca’s Maior SPV, Mariotti said. Out of IFIS’s EUR 2.9bn of investments in NPLs in 2019, EUR 710m were in the secondary market, of which EUR 220m were from GACS SPVs, Mariotti said, and the bank is interested to increase this type of investment.
Several other investors have been looking for NPL secondary trades.

In 2020–2022, IFIS expects the secondary market to be 30% of the total Italian NPL market, in part driven by sales organised by securitisation vehicles, “including those that have benefited from government guarantees (GACS) and are seeking to improve cash generation,” according to its recently published industrial plan.

“The current secondary market is half a primary,” said Antonio Cataneo, country manager for Axactor Italy.

Vehicles are not selling remainders of long-managed portfolios, he explained, but clustered portfolios to specialised buyers.

Axactor has not yet bought from GACS SPVs, but is exploring offers, including some coming from Prelios’s NPL trading platform, BlinkS, Cataneo said. “The real issue is the balance between the value and the prices coming from GACS portfolios. If they have to meet certain level of performances, we will have to see if they will be able to sell at market price.”

The price has to be in line with investors’ expectation while maintaining business plans, agreed Guber Banca CEO Francesco Guarneri.

“Unfortunately,” said Guarneri, so far it has been done very little compared to the huge volume sold.”

by Alessia Pirolo and Amy Finch