The Government of Namibia is on track to fully repay its USD 500m 5.5% bond maturing in November thanks to a local debt swap, director of debt management at the Ministry of Finance Marten Ashikoto told Debtwire.

Through a transaction termed a “debt-for-asset swap” with the Government Institutions Pension Fund (GIPF), the Namibian government has rebuilt its US dollar and South African rand sinking funds to USD 480m and ZAR 1.28bn (USD 92m) respectively as of 17 May, Ashikoto noted.

The sinking funds were set up five years ago to ensure repayment of the November Eurobond maturity, the director said. Before the onset of COVID-19, Namibia had accumulated USD 420m, but decided to draw USD 220m of these funds to cover expenses related to the pandemic, Ashikoto explained.

As such, during 2020, the government found itself in need of US dollar assets for the Eurobond repayment, while the government pension fund needed local assets to comply with local statutory requirements.

In this specific case, the pension fund is retiring ZAR-denominated assets and offering this to the government, who in return offers equivalent local bonds and makes use of the ZAR to buy the equivalent amount of US dollars, Ashikoto explained.

The maturity of the local debt instruments issued ranges from three-month T-bills to 30-year long-term bonds, the director said.

“The intention is for this process to continue until the full USD 500m principal, plus interest outstanding on the Eurobond, is reached,” Ashikoto said. “The proceeds will be used to redeem the Eurobond bond when it matures on 5 November 2021.” 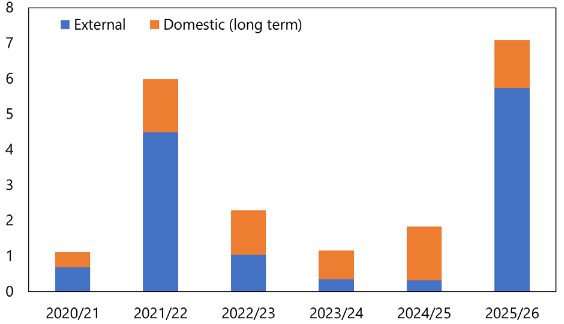 As a result of the swap, the government’s total debt portfolio will not change, but the currency composition will shift towards more domestic debt than foreign debt, reducing the currency risk exposure, Ashikoto explained.

The government intends to issue a larger proportion of ZAR-denominated debt going forward, given the one-to-one exchange rate between the rand and the Namibian dollar, and the fact that a large portion of the country’s revenues are derived from South Africa, the director noted.

Thus far, the government has listed a bond program on the Johannesburg Stock Exchange (JSE) worth ZAR 7bn, of which so far only ZAR 2.2bn has been issued. The intention is to use this platform going forward to print debt, according to Ashikoto.

Still, Namibia does not intend to completely exit US dollar debt markets, and plans are underway to roll over its 2025 Eurobond, according to Ashikoto.

Namibia is also at the very early stages of determining whether a green or even a blue bond issuance would be suitable to its debt management strategy, Ashikoto noted.

“This will largely depend on suitable projects being identified,” the director said. “This would likely be in foreign currency, either US dollar or ZAR.”

Namibia is not the only sovereign on the continent turning to sustainable issuance amid the rise in demand for ESG debt. Egypt printed its debut USD 750m 5.25% 2025 green bond in September 2020, and Ghana is considering a sustainable bond issuance later this year.

As for so-called “Blue Bonds”, whose proceeds are used for sustainable financing of marine activity, the only sovereign example remains that of the Seychelles’ USD 15m 6.5% 2028 bond issued in 2018. Still, the instrument is being explored by a number of African governments, including Namibia, according to a source familiar with the discussions.

Namibia will also continue to fund itself with development financing. In addition to the recently disbursed USD 271m emergency loan secured from the IMF to address the coronavirus pandemic, and three KfW loans worth EUR 100m, Namibia is set to unlock an African Development Bank loan worth NAD 1.5bn (USD 107m) to finance the Namibia Governance and Economic Recovery Support Programme (GERSP). The proceeds of the latter should be disbursed in the coming weeks, Ashikoto said.

Namibia is rated Ba3 by Moody’s and BB- by Fitch.