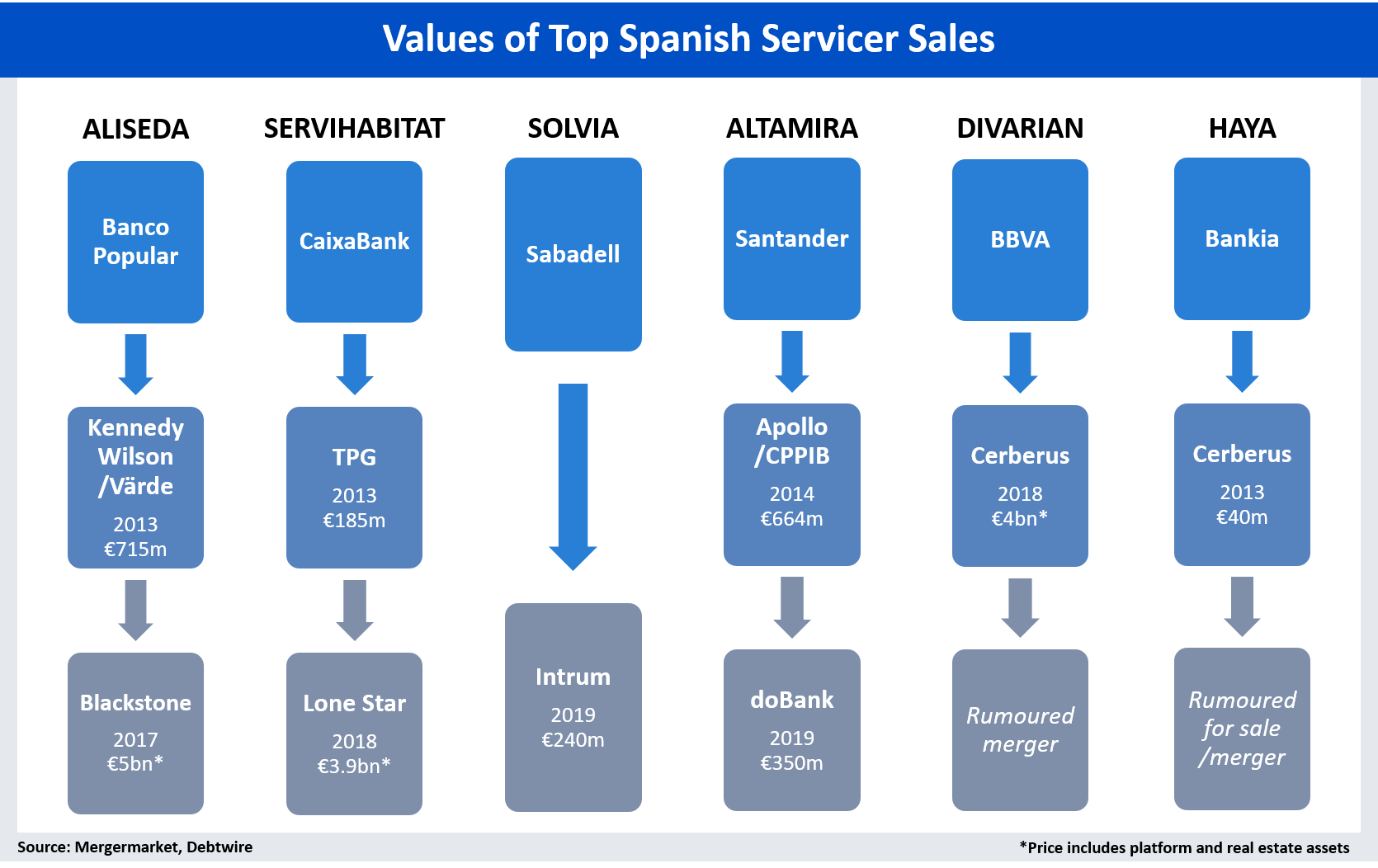 This year is set to be another busy year in the Spanish service sector after a burst of M&A activity.

Cerberus Capital Management bought an 80%-stake in Divarian from BBVA last year and is re-organizing the companies it has hoovered up over the past few years.

The private equity giant is working on the sale of Haya, seeking over EUR 1bn, said a person familiar with the situation, confirming reports from the Spanish press. Cerberus is also currently selling its Spanish credit recovery company, Gescobro, as reported.

The agreement between Haya and Divarian fuelled rumours in the Spanish press of a merger between the two.

“Divarian will continue to exist as a company, but its business is going to be diluted,” said the person familiar. NPLs and real estate management will go to Haya and the developer lands and assets still under development will be sold to Cerberus-owned developer Inmoglaciar, said the person.

An industrial sale of Haya will be much more likely than a merger, the person said. Last year, an attempted IPO of Haya failed. The company is still renegotiating the management of an NPL portfolio owned by Spanish bad bank Sareb.

IPOs of NPL servicers in Spain are complicated by the maturity of the market, said the person familiar. “While in Italy the equity story is that there is still a lot of NPL work to do, Spain is a mature market. In Italy there will be NPLs for at least 10 years, in Spain, for four, five, maybe six. The IPO story is more difficult,” said the person.

With the maturity of the market, industrial players are buying from private equity firms.

Solvia Servicios Inmobilarios (Solvia), which was the last significant servicer still held by a Spanish bank, has left Banco Sabadell’s hands. Intrum agreed to acquire an 80%-stake in Solvia for EUR 240m, with the deal completed last week. As shown, the other five main servicers had already been bought and sold at least once.

Banco Sabadell has another deal ongoing – the sale of its property developer Solvia Desarrollos Inmobiliarios (Sdin Residencial), along with a portfolio of land valued at EUR 1.3bn. Oaktree Capital Management, Cerberus and Bain Capital Credit are due to present binding offers by 15 May, as reported.

The current holder of the top spot in Spanish servicing, Altamira Asset Management, is due to change hands soon. doBank’s acquisition of an 85% stake in the company, which has EUR 55bn of assets under management and operations in Spain, Portugal, Cyprus, and Greece is due to be completed in May 2019, according to the buyer’s latest financial statements.

The price of the 85% stake is EUR 350.2m and the whole company is valued at EUR 412m. doBank may increase its stake to 100% if Banco Santander, the holder of the remaining 15% stake in Altamira, decides to exercise its tag-along right, provided for in existing agreements before closing.

Amy is a data journalist for Debtwire. She covers the sale of NPLs and non-core loans, with a focus on Southern Europe NPLs as well as Irish/UK markets and unsecured loans.