This year is once again set to be a record year for the European non-performing loans (NPL) market, according to new data from Debtwire ABS, presented yesterday (17 October) at Debtwire Week.

Almost EUR 125bn of closed NPL sales were tracked in the first three quarters of 2018, and a total of almost EUR 60bn is in the pipeline. The annual volume is clearly set to surpass the EUR 144m sales totalled in 2017, according to Deloitte.

In the past few years, the flow of NPL trades has been moving from Northern Europe to the South and now the Mediterranean countries are firmly at the centre of the action. 2018 might have been peak year for NPL sales in Europe, however.

The most active countries remain Italy and Spain, with Greece, Portugal and Cyprus finally beginning to see large sales.

In the first three quarters of 2018, 33 NPL sales with a gross book value (GBV) of  EUR59.3bn were tracked in Italy, with 18 other sales worth EUR 31.4bn in the pipeline. Two-thirds of the transactions closed so far were via securitisations within the government’s Garanzia sulla Cartolarizzazione delle Sofferenze (GACS) scheme, which now has only until March 2019 to run. With another renewal uncertain, banks are working on more traditional sales and focusing on the disposal of unlikely-to-pay (UTP) loans. 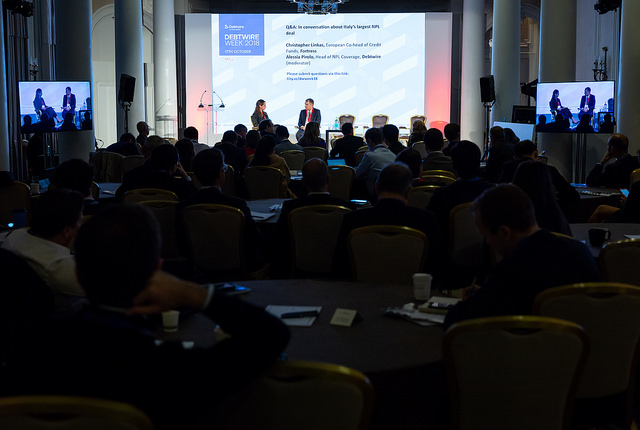 Italian NPL trades are the subject of discussion at Debtwire Week.

In Spain, most of the 13 sales worth a EUR 33.4bn GBV tracked in the first three quarters of 2018 were connected to jumbo deals, involving three main buyers – Blackstone Group, Cerberus Capital Management, and Lone Star Funds. There were another 9 worth EUR 11.1bn in the pipeline as of September. Large Spanish banks are in advanced stages of cleaning up their balance sheets and some are now focusing on residential mortgages.

The residential market is where Ireland is currently focusing as showed by the five sales EUR 11bn tracked so far this year.

One of the new entries in the European market is Portugal where four sales for EUR 2.16bn were closed in the first three quarters, while six for EUR 4.2bn were on the pipeline as at the end of September.

Cyprus has also seen its first NPL disposals. Debtwire has tracked two deals so far this year, for EUR 2.9bn, but Project Helix, which Bank of Cyprus sold to Apollo Global Management, totalled EUR 2.8bn on its own.

Although active, these two markets remain small compared with Italy and Spain. A real sizeable one is Greece, which at peak had about EUR 100bn non-performing exposure. At the end of September 2018, Greece had the third largest pipeline of NPL portfolio sales in Europe, with eight sales tracked by Debtwire totalling EUR 7.5bn. In the first three quarters, five sales have closed for EUR 6.5bn.

Chinese NPLs hit RMB 1.96trn (USD 285bn) at the end of the first quarter, up by RMB 183bn (USD 26.6bn) from the previous quarter, the largest quarterly increase in a decade, according to the China Banking and Insurance Regulatory Commission. In India, banks’ bad loans stood at 10.36trn (USD 150.21bn) at the end of March 2018, up from 9trn rupees in December 2017, according to a statement by Finance Minister Piyush Goyal in Parliament.

The Chinese market has been the talk of the NPL town for years now. International investors like Bain Capital Credit, Blackstone, and Oaktree Capital Management have already bought sizeable portfolios in China. Yet the deals are only several hundred million dollars equivalent, rather than the billion plus portfolios seen in Europe.

“With levels of undeployed capital in the market generally remaining high, investors continue to seek new opportunities in non-performing asset classes and geographies,” said Mark Edwards, partner at law firm Ashurst, which was one of the sponsors of Debtwire Week. “Whilst China and other emerging markets represent a potential promising pipeline, it remains to be seen whether NPL investment markets will open up in these regions to the same extent that we have seen in Europe.”