Salini Impregilo faced some extraordinary cash outflows and delayed payments in 2H19 that raised liquidity concerns, while its bonds had started to underperform even before the sharp market selloffs over the past weeks. But the Italy-based construction company enjoys the support of the national government and, although the spread of the coronavirus is likely to take a toll, the group is well positioned to capture potential benefits of counter-cyclical measures, leaving a sellsider constructive, two buysiders considering the bonds a buy while a third buysider and second sellside analyst were bearish.

Salini’s FY19 adjusted revenues declined by 1.5% to EUR 5.33bn as sales fell in the Middle East, Africa and Europe (ex-Italy). Topline improved in Italy and North America, where the turnaround of its subsidiary Lane resulted in 23.4% sales increase to EUR 1.2bn. 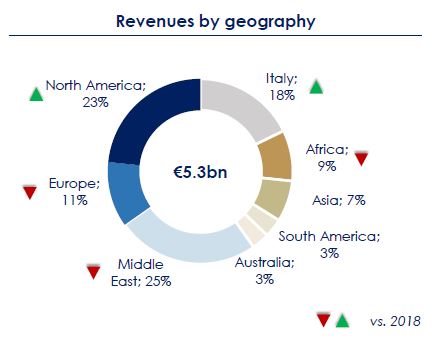 “The results were not great, obviously. The fundamentals were quite poor but the strong involvement of the government and the banks as shareholders makes me quite constructive,” one sellsider said.

Against this backdrop, the company’s net financial position improved by EUR 318m thanks to the capital increase but the group effectively burnt through EUR 631m over the year.

“They said they were going to generate cash in H2 as well. Instead they ended up burning through EUR 300m of cash in H2, and in H1 they usually have a cash outflow. At the same time they are seeing increased payment delays in Italy,” one buysider said.

“This company has to generate cash in the long-term,” management said during the investor call held yesterday (12 March). “No one [on the equity roadshow] was told that in the next three to six months we would be able to generate cash. We don’t have to rely on a single project or a single country. For COVID-19, we have a lot of cash. We still have EUR 500m of the cap line. We have a lot of guarantees and, surety, support. So we can face also this difficult time with a very strong financial position.”

“They have cash, they actually do. On the cash flow statement, when I look at their actual flow, it has been growing. We don’t look at this company as a cash drain. Forward-looking for 2020, there is no liquidity issue,” a second buysider agreed.

“In 9M19, they generated cash, so 4Q had some weakness in free cashflow generation. It happens with the sector,” a third buysider noted. “At this point, the issue is that people assume that any negative working capital swing in construction companies will never come back. If people were seeing that the negative working capital was coming back and would put that into cash generation, then they’d be seeing a lot of these companies as cash generative.”

“They have EUR 250m of receivables from the Italian government which were delayed to 2020 so that's not great, it's the same story all the time. But with the fact that it comes essentially from one of the company's shareholders, we should expect for them to be paid in 2020,” the first sellsider added.

"This [their payment delays] is exactly what happened with CMC di Ravenna,” the first buysider countered. “They kept asking the market for more time to collect on receivables but never managed. This is what kills these companies.”

The concerns regarding a prolonged cash burn, payment delays and working capital swings is that these could derail Salini’s planned acquisition of a 65% stake in the Italian construction company Astaldi, the first buysider and second sellsider said.

“Salini Impregilo presents a high level of risk in relation to its execution of Astaldi acquisition and integration,” the analyst said. “This possible negative impact could be exacerbated by working capital dynamics, similar to the ones that we saw at play in other Italian construction companies like CMC Ravenna and Astaldi itself, whereby collection of receivables proved more challenging than management expected, leading to unsustainable increases of debt and leverage.”

Comparisons to smaller Italian construction players that failed because of problems in their business models do not apply to Salini, as it is a global player with geographically diversified revenues, the second buysider noted.

“Salini is a globally diversified company. It’s not ‘Italian Construction S.p.A.” although that is how some people are treating it. The biggest portion of this company is really in the Middle East and another part in Italy and after that Europe ex-Italy,” he said. “It’ll be fine for them when the Astaldi transaction kicks in. It’s going to bring additional EBITDA and revenues with no additional debt so they can execute and make money off.”

Astaldi’s creditors are set to vote on a restructuring proposal for the company in a meeting to be held on 26 March. The plan centers around a takeover of the distressed construction company by Salini, which would pay EUR 225m for 65% of Astaldi’s equity.

In a meeting held on 25 February, the majority of holders of Astaldi’s EUR 140m senior unsecured notes maturing in 2024 indicated their support for the composition of the creditors agreement. Holders of the EUR 750m senior unsecured notes maturing in 2020 are to express their vote in meetings called for 17 and 24 March. At the wider creditor meeting, the bondholder representative will express the view of the block depending on the outcome of the three meetings.

If the majority of the creditors votes in favour on 26 March and the tribunal of Rome - which is supervising Astaldi’s concordato preventivo proceedings- homologates the plan, Salini will proceed with the transaction. The cash-out for Astaldi is expected to materialise in 2H20, management said during the call.

Salini has reached out to investment funds pitching partnerships to bid for infrastructure projects worldwide in the segment known as Design-Build-Finance-Operate-Maintain, as reported. The goal is to build long-term strategic alliances over the next three to five years. Among the funds contacted were Antin Infrastructure Partners, Apollo Global Management, Ardian, Brookfield Infrastructure Partners, KKR, Partners Group and Macquarie, according to a source familiar with the situation.

“Working in a JV is not so much for the cash,” the third buysider countered. “The extent of control that comes with external guidelines is positive. It is not a liquidity issue. It is just the final slice of capital. They are doing this conservatively. I think it’s a positive guideline.”

But the timing of the announcement was concerning, the first sellsider said.

“They already have much backlog to execute. The priority shouldn’t be getting new contracts,” he said. “I think that they wanted to get a building and concession contract and right now they don’t have a lot of cash to invest in a concession and the partners would inject equity. However, this takes time to materialise. I guess they want to work with someone with a strong financial position.”

Salini’s backlog grew by 11.2% YoY to EUR 29.5bn as of December 2019. An increased share of projects come from more stable markets such as Americas and Australia and shrinking prospective works are based in Africa and the Middle East. 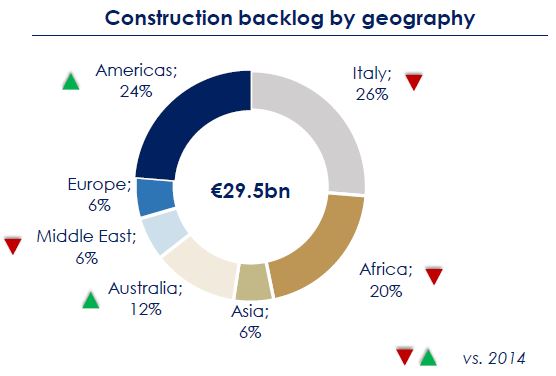 “They have a big order book,” the first buysider said. “But Abengoa, Isolux and Astaldi all had big order books when they filed. The problem is that they need working capital for their orders.”

As Italy is the epicentre of the coronavirus outbreak in Europe and the government is adopting measures to contain its spread, such as the lockdown of the entire country, concerns are mounting. The company’s 2020 outlook of a high single-digit growth in revenues and adjusted EBITDA margins of 7%-7.5% does not incorporate COVID-19 impacts.

“The real worry is if the coronavirus worsens to the point that people in Italy cannot get to work and cannot work on the projects,” the first sellsider noted.

“It’s a construction company. Maybe in the short term they will have some delays in construction. The government is closing down shops and restaurants but not factories, as they are trying to minimise the impact [of the coronavirus ] on the supply side of the economy,” the third buysider said.

As governments announce counter-cyclical measures to limit the impact of the coronavirus outbreak on the real economy, the construction sector should be among the main beneficiaries. Salini should be able to reap the rewards of being the only major player left in the construction field in Italy, two of the buysiders and the first sellsider noted.

“There are going to be a lot of fiscal measures in Italy and across Europe, with spending to support the economy, and Salini is well-positioned to receive this boost. Sectors such as construction will benefit the most in the short term,” the third buysider added.

“There is a problem [with the coronavirus] as long as you believe that the Italian government is going to go into austerity, but it is the exact opposite. The government is trying to pump money into the economy. It takes a while due to the way most contracts related to public funding work but infrastructure companies should benefit in the short term.”

“We are expecting no slowdown in cash-in from COVID-19,” said the management during the investor call. “It depends on how long it will stay and which measures each [national] government will take to combat it. We are anti cyclical, [things will go on] unless they forbid us from working, which is a different thing. Of course, for now not to be physically present in [corporate] meetings doesn’t help. The supply chain will resist for some amount of weeks but if the issues persist, they will be for the whole industry and not just an issue for us.”

“It is not a great call, if you notice that bonds are down more than the market's downward movement,” the first sellside analyst noted. “But I think that, broadly speaking, with the huge involvement of the state, it will be fine.”

“The [yield] curve is inverted. The 2021s are trading cheaper than the 2027s. This is common in distressed situations. It is not so much [related to a] micro scenario regarding Salini but basically the general broad market concern that risks for funds will be short-term,” the second buysider pointed out. “At these levels, the notes are a buy since the COVID-19 outbreak might dissipate over the next couple of months and prices should then recover.”

“This is a shock. In theory, a short term shock followed by global stimulus in terms of actual spending. I’d probably want to buy, on a yield basis, the 2021s. It is hard to imagine them not having the money to take out the 2021s,” he added.

“The bonds actually look like one of the best things to pick right now versus a bunch of other stuff that is out there. You have a lot of sectors that are going to be in trouble like airlines, for instance,” the third buysider agreed.

“Salini as it stands right now, together with the Astaldi contribution, it should be ok. I’m not overly concerned at this point.”