Turkish Eurobond issuance volume year-to-date (YTD) is already double that in 1Q18, following a deluge of Anatolian deals in March, according to a Debtwire analysis. Some USD 9.4bn worth of US dollar- and euro-denominated bonds have been issued so far this year, compared to USD 4.7bn in 1Q18.

Turkey was one of 2018’s biggest emerging market underperformers after the lira bottomed out last summer. But market sentiment toward the country has rebounded rapidly – with average demand for deals placed in 2019 YTD outstripping average demand in FY18.

“A number of issuers from Turkey have taken advantage of a very constructive emerging market issuance environment that few market participants anticipated at the start of the year,” said Stefan Weiler, head of CEEMEA debt capital markets at JPMorgan. “Issuance from Turkey benefited from the very limited primary supply last year and a quite clear political calendar.”

Demand for a bargain

Turkish Eurobond deals placed so far this year generated demand of at least USD 23.2bn-equivalent, according to data available to Debtwire*. On average, the deals placed in 2019 YTD were 2.62x oversubscribed, according to the data, compared to an average of 2.51x in FY18.

The oversubscription level in 2019 YTD also compares favourably with the 2.57x average in 1Q18, before last year’s currency crisis struck. The resiliency of demand suggests that market appetite for new issuance from Turkey is far from saturated.

“I think we’ll be seeing plenty more Turkish issuance as the year unfolds,” said Kevin Daly, portfolio manager at Aberdeen Asset Management. “We’ve been in a risk-on environment, which has been supportive for Turkish issuers. A good example of that was Yapi Kredi’s Tier 1 issue in January, the first ever Additional Tier 1 bond by a Turkish issuer,” he continued. 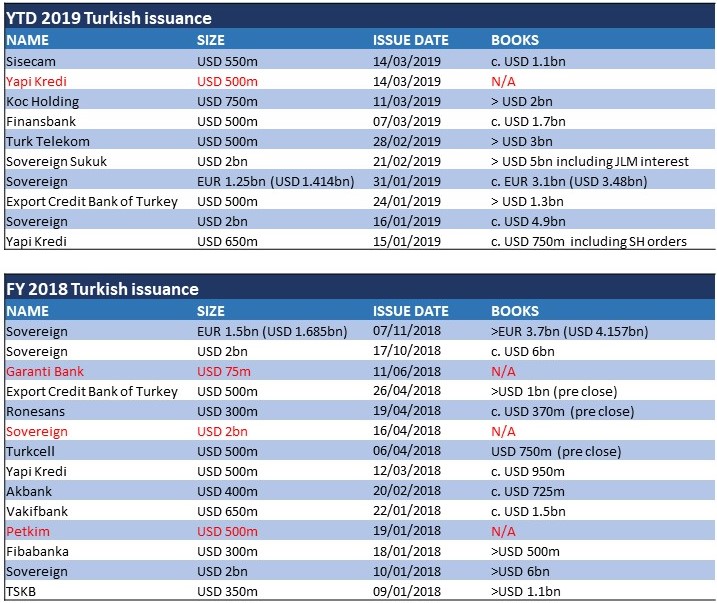 With sovereign, financial and corporate bonds trading at deep discounts to par in 2018, asset managers may have spotted a bargain in the Turkish souk. “After underperforming last year, it is also more likely that investors see more attractive value proposition in Turkey relative to other jurisdictions,” said JPMorgan’s Weiler.

In a sign that some banks may be consciously stepping back from Turkey, despite the fizzy new issuance market, HSBC – which was the top-ranked bookrunner in the country last year – has slipped out of the top 10 bookrunners in Turkey YTD.

Citi has leapfrogged to the number one bookrunner spot by both value and deal count in 2019 YTD, up from fifth place last year. It is joined by fellow US-based bank JPMorgan and by Deutsche Bank in the top three places by value.

*Subscription level calculations exclude deals for which Debtwire has no books data.

European chart of the week: High-yield bond market off to a strong start in 2020

Leveraged loan pipeline off to a flying start in 2020

European Chart of the Week: European secondary loan market, like its US counterpart, rebounds in December